The impact of A Different World is irrefutable. It’s easy to find HBCU alumni, students and friends who revel in their Hillman College experience. I mean, really, who among us isn’t binge watching A Different World on Netflix? (If you aren’t we won’t judge you. Just get your cousin’s Netflix info and join us.)

Hillman College and Ribs. Is there a better combination? Let’s ask Dr. de!

Winston Robinson, founder of Hillman Bookstore, is like many in my generation. His understanding of HBCU culture began with A Different World. As a child, Robinson says his view of school of was unfavorable. “I saw college as more school and more work.” The middle of the first season of A Different World found him changed. He was determined to turn this experience into a lifestyle. The idea of living a Ron Johnson-ish lifestyle was the motivation he needed to put effort into his studies to help ensure his collegiate acceptance.

“Black colleges were on my mind. That spark led me to the greatest HBCU in the country: Winston-Salem State University.”

March 2010 found Robinson at NBC studios in New York, the birthplace of some of his favorite television programming. His child-like excitement caused him to reserve tickets months in advance. Like all good tourists, he headed directly to the NBC gift shop after the tour. Surrounded by nostalgic items from Saved By The Bell and Knight Rider, he immediately began to search the shop for The Cosby Show and A Different World merchandise.

“That one-hour block of NBC television influenced my life’s path. It altered my destiny, and I am not alone. Hillman was the introduction of HBCU culture to the American mainstream. HBCUs throughout the country had increased enrollment during the show’s run, and I do not think it is a coincidence. We want to reignite the passion from the early 1990’s when people had immense pride for all things black.”

There was no better way to pay homage to the fictional institution than to wear a t-shirt bearing it’s name. Robinson searched the gift shop for nearly an hour. He then found an employee and asked for help. The ‘We don’t carry that stuff’ reaction angered and motivated him.

“I was beyond pissed and decided to do something because I feel like ‘we’ matter and deserve to be represented.” 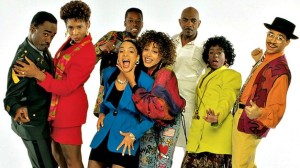 While we are inundated with misrepresentation on reality television, many of the important pieces of black culture are lost in the entertainment mix. Robinson want’s his merchandise to start a dialogue about HBCUs. It all begins with a conversation.

E. Clare Stewart, MSPH is graduate of Fisk University and Meharry Medical College, School of Graduate Studies and Research. She is a doctoral student in the Institute of Public Health at Florida A&M University.  Follow her on twitter at @EClareStewart or contact her via email at ecstewart@HBCUstory.com.

One thought on “The Hillman College Bookstore”